Osaka Castle, or “Osaka-jo” in Japanese, is certainly one of the most famous landmarks in Japan, and for good reason. This five-story castle is one of the most visually spectacular creations in the country, with a history that dates back almost 450 years!

One of the most fascinating features of Japanese culture is the sheer breadth of its rich history – across the country there are thousands of shrines, temples and castles dating back literally hundreds of years, each with an interesting story to tell. Year-round, travellers from within Japan and abroad make pilgrimages to many of these cultural landmarks to either pay respects, learn about Japanese history, or merely appreciate the stunningly intricate architecture for which Japan is globally renowned. Osaka Castle, or “Osaka-jo” in Japanese, is certainly one of the most famous landmarks in Japan, and for good reason. This five-story castle is one of the most visually spectacular creations in the country, with a history that dates back almost 450 years!

In 1583, Hideyoshi Toyotomi (1537-1598), a powerful feudal lord and warrior during the Sengoku period, built Osaka Castle during a period of unrest which had followed numerous wars over the previous decades. Obsessed with gold, Hideyoshi insisted that gold be applied to much of the castle’s interior furnishing, with this motif also appearing on the exterior awnings to this day. Upon completion, Hideyoshi held the castle as a stronghold, which led to a secession of the wars that were raging in Japan at that time – essentially unifying the country and bringing temporary peace.

As history tends to prove, peace did not last forever, and numerous wars broke out over the coming centuries. Osaka Castle was destroyed and rebuilt numerous times, and not always by war – in 1665 the main castle tower was in fact destroyed by fire as a result of a lightning storm. After this period the castle stood for another 200 years, before again being destroyed during the Boshin War. The most recent (and hopefully permanent) iteration of Osaka Castle was reconstructed in 1928, and while it did suffer some minor damage during World War II, the main structure lived on, and after being recognised as a “Historic Site” by the Japanese Government in the 1950s the castle lives on to this day. The current Osaka Castle is a beautiful testament to traditional Japanese architecture, from the subtle balance of colour to the delicate patterns and shapes that adorn each level. 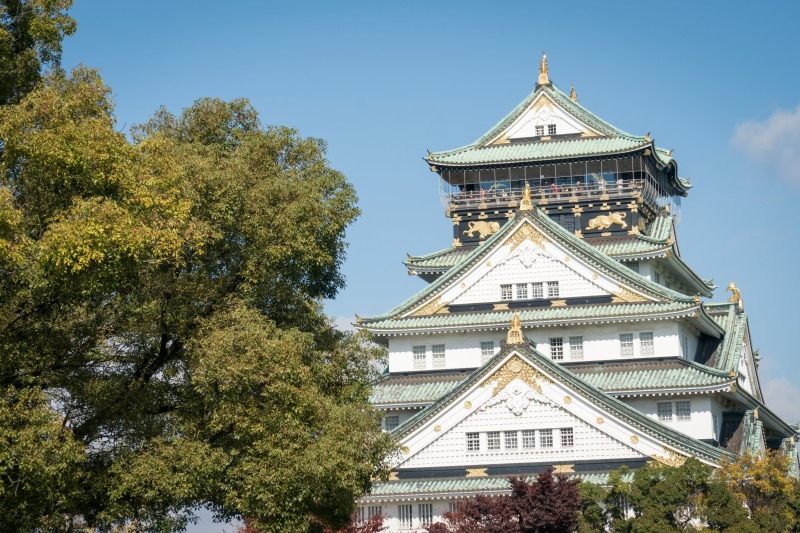 Visitors to Osaka Castle can enter inside, which currently operates a historical museum, for a small fee (15 years and younger can enter for free), with group discounts available. On each floor inside the castle are a wide variety of artefacts detailing the extensive history of Osaka and the castle itself. While not all the artefact information is available in English, there are leaflets available that explain much of the exhibits. On the top floor visitors can catch a breathtaking view of the surrounding areas, taking in the parks and cityscapes. 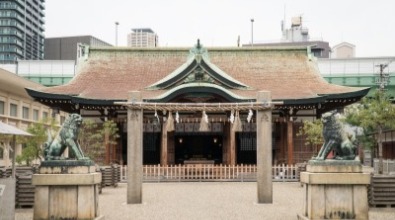 While the castle itself is indeed beautiful, the surrounding parks are also worth exploring. Osaka Castle Park was opened in 1931, and has become an incredibly popular destination for its changing foliage in the spring’s ‘sakura’ (cherry blossom) season, as well as the autumn’s ‘koyo’ (falling leaves) season.

It is quite easy to spend hours roaming around and enjoying a beautiful day underneath the trees, imagining the amazing things that occurred there in the past. In fact, there are still structures that have managed to escape the wars, having existed intact since the Edo period (1603-1868). Certainly the best views of Osaka Castle can be seen from the parks area, with the structure itself towering over the stunning natural landscape which envelops it. It is even possible to take a short boat ride around the surrounding moat! Osaka Castle is also famous to some for its incredibly well-built stone wall, which is impressive in its sheer size, with an estimated 500,000 to 1 million large stones (up to 12kg) having been used in its construction. The moat walls stand at up to 20 metres tall and 90 metres wide.

Osaka Castle is surrounded by five different train stations, but the best access is via either Morinomiya or Osakajokoen Station. Coming from either station affords visitors a unique pathway towards the castle through the gardens, and for curious visitors it’s certainly worth arriving by one and departing by the other. It is highly recommended to allocate at least two to three hours at Osaka Castle, which will allow a decent amount of time to really soak in the scenery, from the man-made to the natural.

For first-time visitors to the Kansai region of Japan, Osaka Castle is an absolute must-see destination. It is a perfect half-day trip where one can appreciate both serene nature, in the many areas filled with beautiful trees, and marvel at the rich and intriguing history of Osaka. As Hideyoshi would surely appreciate, this experience is certainly worth its weight in gold!

Originally from Melbourne, Australia, I am a freelance filmmaker based in Tokyo. I moved here to study Japanese language and like many others fell in love with Japan and decided to stay. In my rare moments of spare time you can find me reading Dragon Ball manga or having a beer at an izakaya.