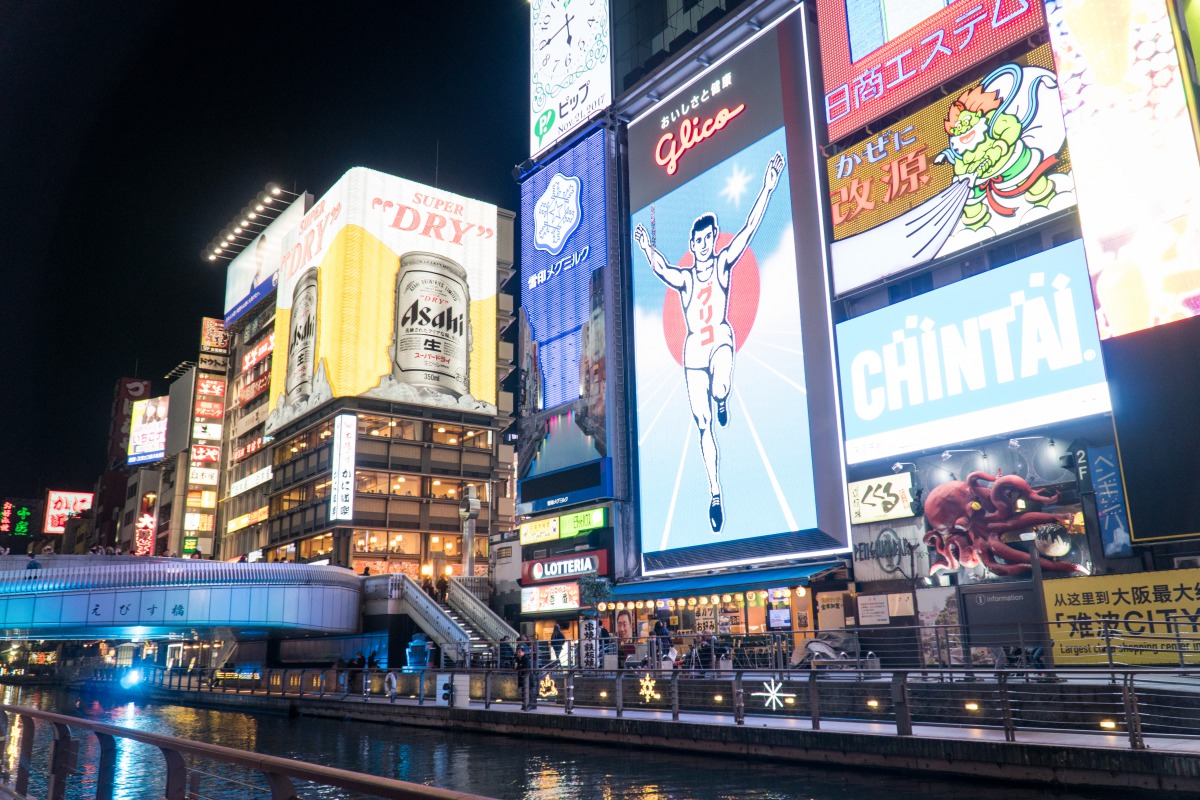 In my experiences travelling across Japan, in particular the bigger cities, I have found that it is not until the sun has passed below the horizon and the neon lights brighten the streets, that the cities come to life. This could not be truer of Kansai's regional capital city, Osaka. Known throughout Japan as the go-to destination for food, Osaka has a world-class restaurant industry, delivering customers an incredible range of delicious local delicacies. Alongside the booming restaurant business is a staggering number of bars, pubs and izakaya (Japanese-style bars), with a countless number of different kinds of alcoholic beverages for visitors to enjoy.

Japan is well known throughout the world for its high-quality affordable beer brands, such as Asahi and Sapporo. Increasingly, Japan is also making a name for itself in the locally brewed craft beer industry as well. In this article we will explore two different sides of Osaka nightlife: the North side and the South side. The most famous area in Osaka is undoubtedly Dotonbori. A restaurant and bar district situated alongside the Dotonbori River, this spot is a must-see when checking out the Osaka nightlife. Simply walk along the strip, grab some takoyaki (grilled octopus balls) along with a beer and enjoy the crazy lights and signs that adorn the shops. Take one of the sets of stairs off the bridges, and go for a short stroll along the river (and make sure to check out the incredibly large neon billboards like the Glico man!). Beginning as a popular theatre district in the 1600s, Hozenji Yokocho is a small alley filled with about 60 bars, izakayas and restaurants that runs behind Hozenji Temple in southern Osaka. There is a huge range of food and drink in this alley, from sushi to shabu shabu (hot pot) and even the Osaka favourite okonomiyaki (found at the restaurant “Yakizen”). For the more upmarket, classy traveller or even just a keen explorer wanting to discover something a little less commonly sought out by tourists, Hozenji Yokocho is a spot worth checking out! It can be found running parallel to Dotonbori, just a short walk from Namba Station. Uranamba, which literally translates to “Behind Namba”, is an area on the eastern side of Namba Station, filled with a range of restaurants and bars, which up until recent years was not considered an exciting spot to socialise. However, these days, depending on the night, it is a bustling hive of varying aged locals who come to wind down after a long day over a few beers and local food. The area itself is a bit of a maze, with most of the best bars being found in alleys that stretch out from the Doguyasuji Shotengai. The Shotengai itself is pretty quiet, with few shops actually running, but the surrounding streets are alive with the smoky smell of grilled food and the sounds of glasses clinking and customers chatting. It is also a place to kick back and have a solitary beer or two after a long day of exploring Osaka! The north side of Osaka, also known as the Kita area, is a little less crowded with tourists as this side of town is not as well known to travellers. For those looking for a more local experience, check out Ohatsu Tenjin Urasando – a tiny street, no more than sixty metres in length and home to a small number of different bars, restaurants and izakaya. Upon my visit the rain was coming down quite heavily, which led to most of the establishments covering the outside tables, but nonetheless it is quite a picturesque little alley. Only a short 5-minute walk from either Osaka or Umeda Station, Ohatsu Tenjin Urasando is certainly worth a peek. Just a short walk from Tenma Station on the North side of Osaka in the Tenjinbashi district is Beer Belly, a Western-style pub offering a huge variety of locally brewed craft beers. On tap in this pub are a number of beers from the world-famous Minoh Beer brewery, a family-owned Osaka-based brewery founded in 1997 (fun fact - the brewery company is run by three sisters!). In recent years, Japan’s craft beer culture has exploded, with many local brewers including Minoh Beer winning international awards for the quality of its IPA’s and other beers. Beer Belly is a perfect opportunity for the international beer connoisseur to sample a great selection of top-quality Japanese craft beers.

As a budding beer enthusiast myself, I was excited to try what Beer Belly had to offer. My first order was a pale ale as it is usually the style of beer I prefer. The pale ale they had on tap was a sweet, full-flavoured beer that was easy to drink and quite delicious. In true pub-style, soon after, I ordered myself a plate of fish and chips along with another beer. Minoh Beer being famous for their IPA, I know I could not leave without trying it.

The fish and chips were a delightful treat for me, as having lived in Tokyo for more than two years it had been a long time since having it. Beer Belly’s fish was crispy and fresh, and the potato wedges served were crunchy and paired well with the provided tartar sauce. Hot and fresh out of the kitchen, this meal was well made and extremely tasty.The piece de résistance was certainly the IPA. Bitter, woody with a mature full-bodied flavour, this beer left a taste in my mouth that I can still remember writing this out days later. Sitting at the bar overhearing many of the other customers, this pub’s IPA was without a doubt the fan favourite.

Go Explore the nightlife of Osaka! Osaka’s nightlife is perfect for the traveller who wants to take it slow and really savour the flavours that this city has to offer. Kick back with a beer in one of the literally countless number of bars and izakaya that fill the alleyways. With the immense variety of food and drink available in both the South and North side of the city, I guarantee that any open-minded visitor will find something to their liking. Go explore the nightlife of Osaka (with an Osaka Amazing Pass! )

Originally from Melbourne, Australia, I am a freelance filmmaker based in Tokyo. I moved here to study Japanese language and like many others fell in love with Japan and decided to stay. In my rare moments of spare time you can find me reading Dragon Ball manga or having a beer at an izakaya.