Kappo, which became an established style of Japanese cuisine in the late 1910s, is said to have originated in Osaka.  It arose as the high-end Japanese restaurants that previously flourished began to disappear, and people wanted a more casual style of dining. The chef stands in front of the chopping board, encircled by the counter.  Meanwhile, customers delight in watching the deft action of the knife as the fish is prepared, taking in the scents and sounds of the simmering vegetables.

Prior to that, food had been prepared prior to customer’s  arrival.

With kappo cuisine, orders were cooked before the customer’s eyes, allowing food to be consumed when freshly prepared. In the old fancy establishments, the kitchen was hidden and dishes brought out by restaurant staff.  The Kappo style featured an open kitchen, allowing diners to enjoy watching the actual cooking, as well as banter with the chef.

The sea bream is spectacular.

”“Well then, let’s have some sashimi.”

“Right. And how about I stew the head, too?”

In this way, chefs’ ability to judge what the diner wanted based on the conversation and offer something suitable became a measure of their skill.Kappo cuisine became much-loved by Osakans as symbolizing a new era, and restaurants of this style flourished accordingly.

Now, such restaurants may be found overseas in addition to Japan. 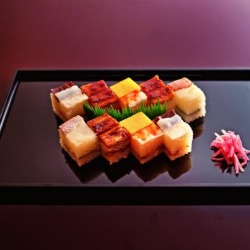