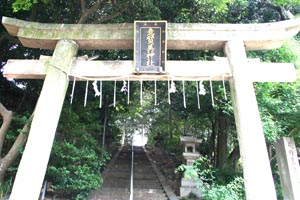 Although this ancient shrine can be found in the ancient Engishiki records, the exact date of its establishment is unknown.

Although this ancient shrine can be found in the ancient Engishiki records, the exact date of its establishment is unknown. It is located on land once known as Mt. Ikagamiya. The shrine is known as a birthplace shrine and as the guardian shrine of the Yodogawa River. It was established long ago by sailors who visited the shrine to pray for safety at sea and to ward off water-related misfortune. They say Takaokami-no-Okami was enshrined here during the reign of the 9th emperor.Math ema prayer boards with prayers to improve as a mathematician can be found stored in the reference room. In the 19th century, an Osaka mathematician was said to have stayed at the shrine while recovering from an illness. He left the ema prayer boards behind when he recovered. The shrine is also famous for Okami Plum Orchard, which boasts roughly 110 plum trees.