Bounty from the Mountains and the Sea: Osaka “Terroir” Plentiful Seafood in Osaka Bay and the Seto Inland Sea

Osaka Bay has historically been home to an abundant catch of sea life, to the extent that it was once known as “garden of fish.” Here were once huge volumes of sea bream, mackerel, sea eel, scabbard fish, sardines, and conger. Osakans are well-known for being lovers of sea bream, which has historically appeared on tables during times of celebration with the head and tail intact. This prized fish is also known as “cherry blossom sea bream” as its red color deepens just before laying its eggs, which occurs around the time when the cherry trees bloom. This prized fish is also known as “cherry blossom sea bream” as its red color deepens just before laying its eggs, which occurs around the time when the cherry trees bloom. During peak season, sea bream is delicious and cheap. It is also known as a perfect fish to meet Osaka merchants’ waste-not-want-not mentality, since none of it is thrown away. The body is grilled with salt, while the head is simmered or steamed right along with the bones. This practice has earned sea bream the moniker “fish of 100 different culinary styles”—as well as a solid place within Osaka’s unique historical food culture. Also notable in this regard is octopus, which popularly appears as takoyaki filling. Octopus from neighboring Akashi has a firm texture from swimming in strong ocean currents, while those from the calm waters of Osaka Bay are soft and sweet. Tiny fish are also plentiful in the region. For instance, Mini-sized jakoebi shrimp are used in summertime to make dashi for somen wheat noodles and, in the Senshu region of southern Osaka prefecture, a traditional dish of these shrimp boiled with local mizunasu eggplant. The Danjiri Festival in Kishiwada, also known as the Fighting Festival, is referred to alternatively as the Crab Festival due to the reliable appearance of Japanese blue crab during the festivities. Japan's modernization once led to a decline in the catch, but today, more than 200 species are hauled in daily before making their way onto appreciative customers’ plates at sushi restaurants and other eateries across Osaka. 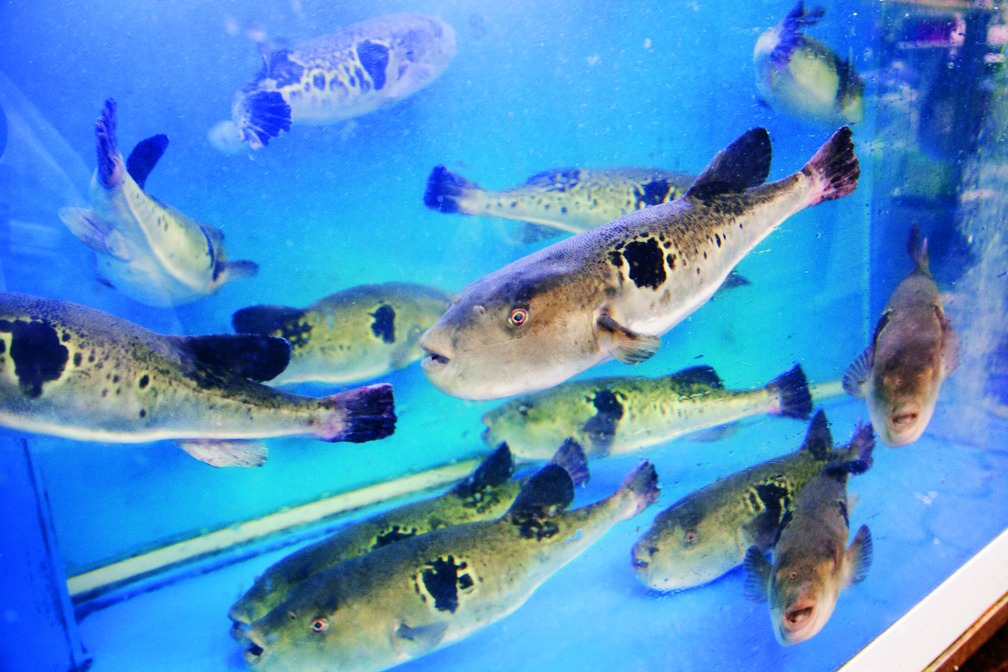 Osaka accounts for 60% of the total consumption of fugu in Japan.
Osaka bay is known as “the garden of fish,” and it is a bountiful seafood resource. Until the 1950s, the fugu catch in Osaka Bay was huge.
The most well-known fugu dishes are tessa (fugu sashimi) and tecchiri (fugu hot pot). These were very popular “people’s dishes” in times past. In 1947, the Osaka municipal bylaw banning the consumption of fugu was lifted, causing a sharp increase in restaurants serving fugu. Conger eel sits alongside sea bream and daggertooth pike conger as an indispensable part of Osaka food culture.
Osaka Bay used to be home to a thriving conger eel long-line fishing industry, and the conger eel from near Sakai was particularly famous. Before World War II, Dejima in Sakai was home to many specialist conger eel processors, which caused the area to become known as “conger eel row.”
Osaka is known for a diverse range of dishes, including pressed sushi of fish broiled with soy sauce and mirin; conger eel on rice bowls; hot pots; chawanmushi savory egg custard; conger eel head broiled with soy sauce and mirin is cooked with grilled tofu; stewed conger eel sushi; tempura; boiled quail eggs wrapped in raw conger eel; salt-boiled liver; and liver tsukudani. Conger eels are born 2,000km south of Osaka in waters east of Taiwan.
Juvenile fish make the journey to Japan in early spring. By year’s end they have grown from 8cm long to 28cm long. The bigger the get, the more fat they develop, and the tastier they become. Conger eels are best eaten in May and June.

Shiny red sea bream is loved by the people of Osaka. The area is a hub of expertise built up over centuries regarding the catching and shipping of fresh seafood . You can enjoy sashimi or sushi, try dried and matured fish dishes or have sea bream flavored chazuke for lunch at many restaurants in Osaka. During the Edo era, Osaka—known as "the nation's kitchen"—was home to numerous unique vegetables that individuals consumed on a daily basis. As agricultural lands were turned into residential areas, however, and diets became more Westernized, these traditional vegetables have declined. Recently, there has been a trend toward re-examining this traditional food culture. With the help of Osaka prefectural sponsorship, an increasing number of agricultural producers have begun researching and recreating these traditional Osaka vegetables. As of 2019, a total of 18 varieties have received certification in this regard from the Osaka prefectural government. When mentioning traditional vegetables, those from Kyoto often come to mind. Because Kyoto produce was traditionally destined for royalty, these vegetables were historically famed for their delicious and delicate flavor, along with an elegant appearance. Osakans, meanwhile, care exclusively for taste—meaning that traditional Osaka vegetables had a rich flavor but a rough appearance. For example, a melon-like vegetable known as the Tamatsukuri kuromon shirouri clocks in at the enormous size of around 30 centimeters long, while the Kotsuma nankin—a member of the pumpkin family—is tiny and bumpy, but features a pleasingly thick and sticky texture.
The Moriguchi daikon (radish) is long and thin, sometimes reaching immense lengths of more than 180cm, while the Kema cucumber is known for its firm texture and bitter taste.